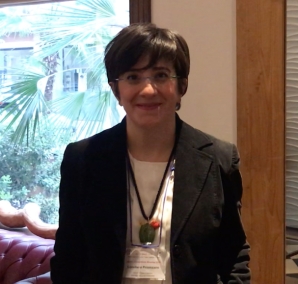 Loredana Prisinzano graduated at the Padua University in 2000 and completed her PhD in Physics at the Palermo University in 2004. During the PhD she spent a period at the European Southern Observatory in Garching, Germany working in the project ESO imaging survey-Pre-FLAMES survey. She had several contracts at INAF-Astronomical Observatory of Palermo and a visitor contract at the California Institute of Technology, Pasadena, USA in 2006.

Since December 2012 she is staff researcher at INAF-Astronomical Observatory of Palermo. She is actively involved in the Gaia-ESO survey, WEAVE SCIP and LSST projects. Her main scientific interests include multi-wavelength photometric and spectroscopic observations of open clusters and star forming regions, including analysis and diagnostics of circumstellar accretion and disks around young stars, that represent the reservoirs of planet-building material. In the last years, with the advent of Gaia and other all-sky or large field catalogues, she used new photometric tools to detect and characterize low-mass stars and, in particular, M-dwarfs in young open clusters and star forming regions.

Leader of the WP 131 220 for the Plato Input Catalogue, she is actively working on the definition of criteria to select and characterise M-dwarf targets for the P4 PLATO sample. As today (March 2019), she is author of 69 papers (12 as first author) in refereed international journals, 1669 citations, and h-index=24, as reported on ADS http://adsabs.harvard.edu/abstract service.html.