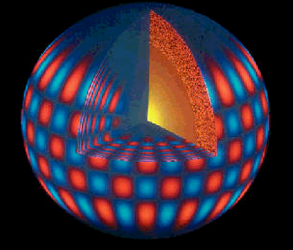 Asteroseismology is the study of the intrinsic oscillations (e.g. normal modes) of stars (Aerts et al. 2010). The oscillations generate small amplitude variations of the light curves which are analysed in Fourier space. Modes of stellar oscillations can be described by spherical harmonics Yℓ,m(θ,φ) as functions of position (θ,φ) on the stellar surface. The eigenfrequencies νn,ℓ,m are described by the three quantum numbers (n,ℓ,m), where nis the radial order, ℓ the latitudinal degree, and m theazimuthal order of the spherical harmonic. Unlike for the Sun, the stellar disk cannot be resolved and the signal from modes of higher degree is strongly suppressed by averaging the disk. As in CoRoT and Kepler, measurements of modes with ℓvalues up to at least 3 are expected for PLATO targets. For a spherical star, there is no dependence on the azimuthal order m; but this degeneracy is broken by rotation and/or magnetic fields. For slow rotation, the frequencies are νn,ℓ,m= νn,ℓ+ m <Ω>, where mbelongs to {−ℓ, ℓ}, and <Ω> is a weighted average of the interior rotation depending on the internal structure of the star and the particular eigenmode. This can be used to probe the internal angular velocity of the star (e.g. Beck et al. 2012; Mosser et al. 2012b).

The oscillation frequencies, including the rotational splitting, are found by fitting peaks in the power spectrum of the light curve. Determining frequencies of modes with ℓ = 0, 1, 2, 3 with the solar data can be achieved, with estimated errors < 0.1 μHz. For the 137 day run on the CoRoT target HD 49385, we extracted frequencies with errors ∼0.3 μHz. Appourchaux et al. (2012) extracted frequencies of 61 main-sequence and subgiant stars Keplerobservations. The 1-sigma errors ranged from 0.1 μHz to 0.4 μHz depending on the magnitude and the spectral type of the star. Silva Aguirre et al. (2015) analysed data on individual frequencies for 33 stars observed by Kepler to be (potential) planet hosts. The baseline of the observations was long enough that the uncertainties of individual frequencies were about 0.3 µHz for frequencies close to νmax (and down to 0.1 µHz in the best cases). The goal to be performed with PLATO is to achieve precisions of about 0.1 μHz for thousands of stars.

The power spectra show characteristic spacings between the peaks. These are usually described in terms of separations, such as the large separations Δν = νn,ℓ− νn−1,ℓ between modes of the same degree ℓ and adjacent n values and the small separations, e.g. δ02= νn,0− νn−1,2 between the narrowly separated peaks corresponding to modes ℓ = 0, 2. Additionally we have the small separations δ01= νn,0− (νn−1,1+ νn,1)/2. These are particularly valuable when only modes of degree ℓ = 0, 1 can be reliably determined. The separations provide diagnostic information on the stellar internal structure near the core and hence information on the age of the star. The large separations provide a measurement of the star’s acoustic radius, i.e., the travel time of a sound wave from the stellar centre to the surface, which is related to the stellar mean density ~M/R3, while the small separations such as δ01, δ02 give diagnostics of the interior structure. Periodic modulations in the frequencies or separations give diagnostics of the location of the boundaries of envelopes, of convective cores, and the extension of nuclearly processed regions with a direct impact on the ages, as well as properties of the helium ionisation zone and surface helium content (e.g. Verma et al. 2014a; Roxburgh 2009; Miglio et al. 2010; Mazumdar et al. 2014).