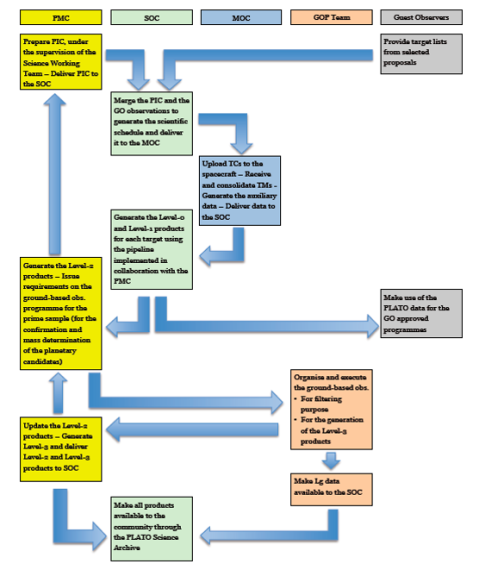 For each spacecraft pointing, the list of targets to be observed will be identified and compiled in the PLATO Input Catalogue (PIC). A first version of the PIC with the targets in the first LOP sky field will be delivered by the PMC two years before launch. Updates of the PIC are planned nine months before launch and six months before the start of each sky field observation in the LOP and SOP. Other fine tunings on the PIC are possible at any time during mission operations following the mission planning cycle.

A “prime sample” will be defined by the PMC consisting of PIC targets to be observed with high PLATO accuracy. The “prime sample” with the targets in the first LOP sky field will be defined nine months before launch and updated six months before every satellite sky field pointing. Ground-based observations will be performed for planetary candidates within this sample during the course of the mission. The best estimate of the ground-based observation time needed for these candidates is given in Section 6.2. For this task, a GOP Team to be responsible of the actual observations will be selected through an ESA AO.

Before launch, the final observing scenario, the PIC and the definition of the “prime sample” will be prepared under the supervision of the Science Working Team (SWT) and reviewed under the responsibility of the ESA Advisory Structure. Further reviews will be done in the course of operations as needed, following updates of the PIC and of the “prime sample” and/or based on the findings of PLATO.

The planning of science operations will be performed at the SOC based upon the inputs from the PDC, endorsed by the PLATO Science Working Team, and from the approved Guest Observer (GO) programmes. The observing schedules will be checked at the SOC and then forwarded to the MOC where they are to be uplinked and executed on board.

During the telecommunication period that will be scheduled several times per week, the data will be acquired via the ground station and delivered to the MOC. The SOC shall retrieve this Level 0 data and perform a quick look assessment and validate this data through the running of quality control. The data will be placed in the SOC archive after which the standard pipeline generation process will be executed, whereby the Level 0 data will pass through a pipeline thus generating Level 1 products, again being placed into the archive. Further quality control checks will be performed by the SOC of this data set to confirm correct integrity and scientific merit before it is made public in the archive.

The SOC will be the main interface point between the PDC and the MOC as regards payload operations in particular relating to safeguarding the payload and optimising the quality of the data set. Such interactions will also include the fine tuning of on-board software, parameters and payload configuration as a result of the quick look data checks of the L0 products.

The PDC data base will access the archive and retrieve L0, L1 and other data sets at which point it will make it available to the centres within the PLATO Mission Consortium to produce the L2 and L3 data. Upon generation of the L2 and L3 product data set with the input from the GOP Team, the PMC will provide those back to the SOC for their ingestion into the archive.