PLATO will answer fundamental questions about planetary formation such as:

These questions have to be studied as a function of planet orbital separations, stellar metallicities, and spectral type. They can only be addressed with a sufficiently large sample of planets of all sizes, from rocky to giant, with well determined masses, radii and bulk densities, around stars of different types and ages. 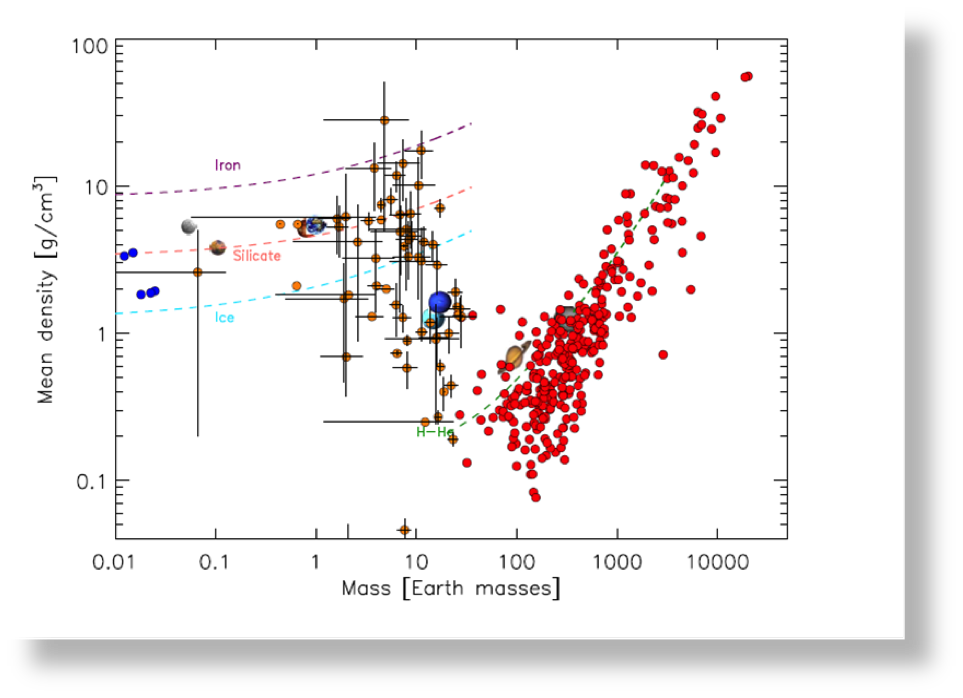 The dashed lines in the drawing above indicate modelled densities for planets with different bulk compositions (following Wagner et al. 2012; see also Zeng et al. 2016 and references therein). The right branch contains gas giant planets that roughly follow the green dashed line that corresponds to a Jupiter-like, H-He dominated bulk composition. The left branch of the roughly V-shaped density-mass distribution is composed of planets with bulk compositions of silicates or ices, some of which have extended atmospheres that reduce their bulk density.

Several hundreds of small planets (R<2RE) will be discovered with well-determined radii (3% precision), orbiting stars bright enough (V≤11) to be characterised with asteroseismology and amenable to spectroscopic follow up from ground, which can provide planetary masses down to 10% uncertainty, filling the left branch.

All these well characterised planets will allow us to test the formation models, like the core-accretion scenario, and the disk instability model, which may or may not be mutually exclusive.

The core accretion model scenario can be tested by increasing the sample of high density, low-mass rocky exoplanets, since those planets define the mass limit beyond which efficient gas accretion starts.

It is worthing to note that the low-mass planets show a wide range of densities that span more than an order-of-magnitude. Planets with low masses and densities below that of pure ice (blue line) are indicative of a large H-dominated envelope. PLATO will identify a large sample of low-mass planets that are likely to have H-dominated envelopes, around different types of stars with different ages. Planet population synthesis models (e.g. Mordasini et al. 2012) predict a large number of low-mass planets (super-Earths and below) with large hydrogen envelopes. Such predictions can be validated by PLATO observations, testing our planet formation theories.